The Difference Between a Mental Lapse and Flow in a Game

“Play until the whistle blows”… Surely, you have heard this expression at some point in your hockey career.

Coaches use this phrase to motivate players to keep fighting until the very last second of the game, no matter the score. You would never want to give up on yourself or the game because it can become a counterproductive to a strong mental game.

“Play until the whistle” has another meaning… Don’t give up on a play during the game until the play is called dead. This may sound obvious but there are many times when a hockey player gives up on a play and it comes back to haunt them.

For example, let’s say you make a soft cross pass along the blue line to set up a teammate for a shot. But the pass is intercepted and you drop your head in frustration before you get back in the play. That slight pause could set up the opposing team for a 2-on-1 breakaway.

Another example is when you expect the referee to whistle the play dead but there is no call. While expecting a whistle for offsides, icing or a penalty, your brief hesitation could lead to a great scoring chance for the other team.

Often athletes hesitate when they are frustrated after a mistake or angered over a non-call. This brief pause in play or mental lapse gives the opposing team a big advantage.

Just such a mental lapse cost the Boston Bruins in Game 5 of the Stanley Cup in their match-up against the St. Louis Blues. In the third period, Bruin forward Noel Acciari was blatantly tripped by St. Louis center Tyler Bozak.

While Boston waited for a penalty to be called, some of the players let up waiting for the whistle to blow.

Not only was there no whistle, the Blues took advantage of the lax Bruin team and scored a few seconds later which turned out to be the game-winning goal. The Blues went on to win 2-1 and take a 3-2 lead in the series.

After the game, Acciari talked about the missed call but the mental lapse played a big part in the loss of the game.

ACCIARI: “It’s a missed call, and it has a big (part) in the outcome of the game. They score a goal off it. That ends up being the game-winner. It’s just kind of embarrassing.”

When you allow your emotions take over and cause a mental lapse, you compound the problem which may very well cost you the game.

How to Prevent Mental Lapses During Games:

Immerse yourself in the flow of the game. Don’t wait for an official to step in when a possible penalty has occurred, since it might not happen! Keep playing hard. Fully focus until the end of the play.

If you get distracted by a missed call, a cheap shot, or a mistake you made, quickly refocus on the current play. Avoiding dwelling on the past, which is the problem for athletes.

You have to recognize the moment you’re not in the flow of the game, stop and regroup so you can focus 100% on the current play. Learn all my strategies for focusing in sports, with The Focused Athlete audio program: 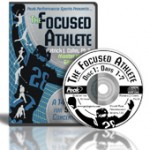 The Focused Athlete: A 14-Day Plan For Focusing Under Pressure And Coping With Distractions

The Relaxed Athlete: A 14-Day Plan For Superior Concentration

What are customers saying about our mental game programs?

“I first purchased ‘The Confident Athlete’ to see how the program went and immediately saw results. I then purchased the rest of the Confident Athlete Series and have noticed a dramatic improvement in my level of play or should I say consistency. I currently play NCAA Division 1 baseball for Lamar University, and even my coaches have noticed a change in the way that I approach the game. My attitude and confidence at the plate. I am able to get into that zone were I am able to narrow my focus on to the task at hand. Thank you for helping in my continuing goal to mental toughness.”*
~Tylor Prudhomme

“By far, The Confident Athlete Series is the most powerful tool I’ve used to perform my best. The simple and easy to use program has helped me take my game to the next level.” *
~Shaun Burrell, professional surfer

Disclaimer
*Testimonials found on this site are examples of what we have done for other clients, and what some of our clients have said about us. However, we cannot guarantee the results in any case. Your results may vary and every situation is different. No compensation was provided for these testimonials.