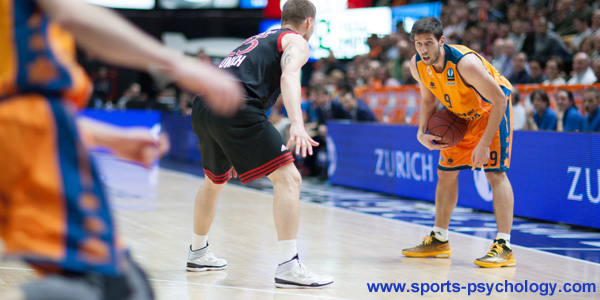 How Kyrie Irving Copes With Pressure

Many times, athletes attribute poor performance to pressure and nervousness. These athletes often complain that their parents, coaches, or teammates put too much pressure on them.

When an athlete experiences extreme pressure to succeed, anxiety skyrockets and performance crashes.

Even when a lot is riding on the competition, such as playing in an elimination game, competing against a rival or performing at nationals, the game remains the same as it always has.

In gymnastics, the apparatuses are the same as when you were younger.

In baseball, the distance between bases is constant.

In volleyball, the net is the same height as it is during practices.

In tennis, the court size is standard.

Even in golf, though conditions and courses may differ, the game has not changed from when you were younger.

If you take this approach, you can lessen the pressure to perform.

One strategy to cope with performance anxiety was employed by Boston Celtics guard Kyrie Irving.

Irving was traded from an NBA powerhouse team, the Cleveland Cavaliers, where he was paired up with LeBron James, one of the best players of all-time. Irving had the charge of pushing the Celtics over the top in hopes of winning an NBA championship.

Coupled with the fact that Irving was facing his former team for the first time, the potential for excessive pressure was palpable.

When asked if he was anxious for the clash against his former team, Irving stated there was no pressure at all.

Irving maintains his composure with his standard approach to every game, no matter the circumstances…

Being booed by opposing fans, being down by 30 points, being in championship games, defending against top scores, taking the final shot of the game…

If you can approach every game as just another game, no more and no less, you can perform with freedom.

How to Minimize Pressure:

Identify 3 parts of competition that have remained the same since your earlier days of competing. Tell yourself, “The game is the same. Go out and have fun.”

You may need to remind yourself of this mindset several times during the competition, especially when you feel your nerves building.

Start by checking out how to become a fearless athlete…

“I learned to play with a confidence that it does not matter if I make it or miss the shot… So what if I miss, it’s only a game.”
~Paul Rask, basketball player

“I wanted to say that your program is one of the contributing factors that has helped Michelle improve her hitting. Last week she had the most relaxed, confident games at bat ever! The mental exercises have started to make things click. The mental program is something she can practice in other facets of life. I am pleased that we decided to invest in your program: the results are showing.”
~Jim Ellis, Michelle’s father

“I think Dr. Cohn’s mental coaching has helped me immensely. It has taught me what to focus on in and out of the racecar. How to stay calm and focused have been key skills that I have learned which have helped me be a better and more confident racecar driver.”
~AJ Allmendinger, NASCAR Driver