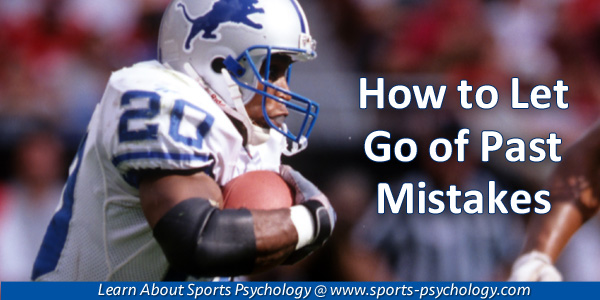 Control Your Focus to Let Go of Mistakes

Letting go of mistakes is a difficult task for many athletes, but a super important skill for all.

If you dwell on the last play, poor routine, error or bad performance and let it to fester in your mind, this leads to more mistakes and a downward spiral.

The memory of mistakes creates a split focus where it divides your focus.

When you have a split focus, half of your mental energy on the past, this is no different than giving half the amount of physical effort in a competition.

If you are not fully present in the moment, you risk making more mistakes and becoming frustrated.

Dwelling on the past is a focusing problem. The mistake is over, but you cannot let go because it is upsetting or frustrating.

How does your concentration work?

Well, you have three moments in time where you can place your focus:

Matthew Stafford, quarterback for the Detroit Lions, is the highest paid player in the National Football League. Despite his contract and being one of the best players in the league, Stafford is not immune from mistakes.

Stafford’s first pass of the 2017 season was a pick-6 and put the Lions behind early in the game. But Stafford remained focused and led his team to score 20 points in the fourth quarter to complete the comeback victory.

After the game, Stafford talked about the importance of letting go of mistakes, moving on and focusing on the present.

STAFFORD: “Focusing on a mistake keeps the attention on yourself. What did I do? How could I have avoided that? They’re worthy questions. Just ask them after the game is over. Your teammates are counting on you to play now, not answer for something in the past while there is still time to get the job done… Keep playing, this is what we talk about.”

Playing in the present is the best way for mistakes to be contained to the past.

How to Let go of Past Mistakes:

Cue yourself after a bad play, routine or performance, and tell yourself, “Move on,” or, “That’s in the past.”

First you have to recognize you’re dwelling, which is half the battle. Then you have to adjust your focus.

Next, ask yourself: “What do I focus on right now to help my team or perform this play?”

Finally, learn all my strategies for a focused performance with “The Focused Athlete” audio and workbook program:

“I felt the time spent in your seminar was very well organized. The topics were great and you had the coaches communicating in an open atmosphere. Thanks again for your time and effort and I look forward to talking with you in the future.”*
~Coach Dave Wannstedt, Miami Dolphins

“After going through a week of practice using your pre-kick routine, I was perfect on three field goals on a muddy field and a windy day in my final college game. Now I am entertaining the idea of trying to enter the professional ranks. Thank you for your help!”*
~Nate Littlefield, Collegiate Kicker

“After your session, Mason had a game. He had the best game so far! He hustled, shot, no goals but two assists but he was cool with it because his focus was on shooting and not scoring (finally), defended well with his hands – finally put it all together. It was fun to watch and you could tell he felt really good about it.”*
~Kelly, Lacrosse mom

“I am a Brazilian coach in Tempe, AZ. I am the vice-president of the Arizona State Brazillian Jiujitsue Federation, long story short, I would like to say that you have a great program; you have been able to help me and my competitors. My fiancee, Kristina Barlaan, who just won two medals at the 2012 World Championship has also mentioned your program as a big help.”*
~Gustavo Dantas, Coach