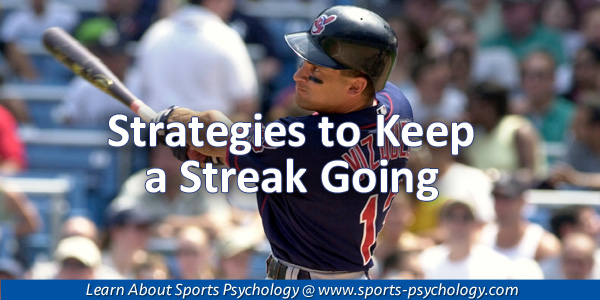 Being in the middle of a winning streak or being in the zone is the desire of all baseball players.

When you are riding the wave of peak performance, baseball is exciting. You can’t wait to go to the park.

In the midst of a win streak, pitchers feel they can hit the corners on demand… Their pitches have great movement… They feel locked in and feel they can get any hitter out.

A team on a winning streak feels loose… The game is fun… And they feel, even if they are trailing late in the game, that they can score enough runs to win the game.

When you are in the middle of a streak, you are totally immersed in the game.

But lurking in the shadows is the enemy of the streak which is conscious thought about the streak.

Hyper-awareness of how you are performing causes you to think about what you are doing rather than just doing it. It pulls you out of the mindset that has kept the streak in motion.

You may even start to fear the end of the streak. Fear about the streak ending or about ‘what might happen’ in the future further pulls you out of the present moment.

The 2017 Cleveland Indians have the longest winning streak, 22 games, in American League history and the longest in baseball in 82 years.

The Indians also have a “don’t talk about it” rule. The Indians are just focused on playing and immersing themselves in the game.

The streak is not the important thing to focus one for the Indians.

What matters most to the Cleveland players, the biggest contributing factor to the streak itself, is showing up to the park prepared to work, playing the game, moving on after the game, then getting ready to play the next game.

This formula has proved to be successful for producing peak play by not just the Indians but other players and teams that have had long stretches of peak performance.

A Tip for Keeping a Streak Going:

Forget about keeping a streak going.

A streak is merely one game played at your peak repeated over time. Focus on playing the current game, not the probability of losing.

Prepare to work, play your best then move on. Yesterday’s game no longer matters in the grand scheme of things and tomorrow’s game cannot be played today.

Your goal should be to be fully engaged in performing your best in the moment–one pitch at a time.

Learn about all my mental preparation strategies for ball players here…

“Thank you so much for talking with our team. You are a great influence. The confidence material really helped me, and I will be working on that as long as I play and after. I can now step out there and just relax and play.”
~Melissa Riesberg, Clarke College Softball

“I wanted to say that your program is one of the contributing factors that has helped Michelle improve her hitting. Last week she had the most relaxed, confident games at bat ever! The mental exercises have started to make things click. The mental program is something she can practice in other facets of life. I am pleased that we decided to invest in your program: the results are showing.”
~Jim Ellis, Michelle’s father

“I want to thank you for your attention with my son Keith, Jr. You helped him to focus his attention on the sequential steps necessary to make the most of his at-bats. Keith went on to have one of his best baseball seasons ever. He led his team in batting average, stolen bases, RBI, and runs scored. He ended the summer with serious interest from several Division I colleges and eventually signed a letter of intent to play for Pennsylvania State University. He received a partial baseball scholarship and is now on the roster. Thanks again for your help.”
~Keith M. Donnell Sr.