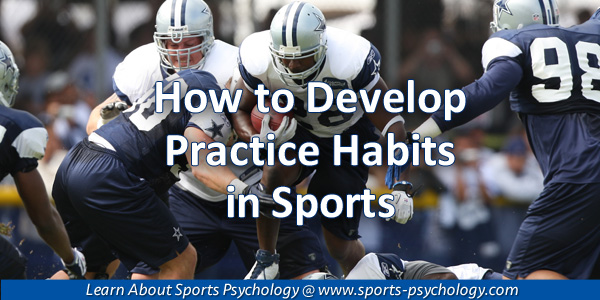 How to Have Successful Practice Habits for Athletes

“We are what we repeatedly do. Excellence, then, is not an act, but a habit.”

This quote is profound and is particularly true for athletes.

Yet so many athletes engage in bad practice habits.

In baseball, many hitters will not run out ground balls…

In gymnastics, many gymnasts will stop their routine in practice after a fall…

In swimming, many swimmers will glide into the finish during long sets…

In tennis, some players will not go hard to get to a wide ball if it requires extra effort…

In golf, some golfers will not perform their pre-shot routine prior to every shot…

When you repeat a bad habit, you are reinforcing that habit.

Regrettably, many athletes say things such as, “I never do that in competition,” or, “It’s only practice.”

The unfortunate reality is that athletes fall back on their habits when they are tired, under more pressure or during critical moments of competition.

The only way to overcome bad habits is to replace those behaviors with more positive productive habits.

One characteristic of successful quarterbacks is taking care of the football and Prescott threw a mere four interceptions in 459 pass attempts.

In an interview, Prescott revealed that his success as quarterback has everything to do with habits, something he learned from his mother after a bad practice when he was younger.

PRESCOTT: “I just remember coming home from practice one day, and I wasn’t too happy, and told her that I didn’t have a good day, that I threw a couple of interceptions. She was like, ‘Well why are we practicing interceptions? Those aren’t good habits.’ That’s something that I’ll never forget, but it’s true. Don’t practice bad habits. I don’t give the ball to a defensive player. Teammates ask me for the ball all the time, and I’ll set it on the ground and let them pick it up, but I won’t throw it to them, and I won’t give it to them.”

Prescott has taken forging habits to a new level and there is no denying of his results.

If you want to achieve more in your sport, perform more consistently or shine when the pressure is on, try focusing on developing strong, effective, positive habits that are in line with your athletic goals.

For a volleyball player, that may mean jump up high to block shots…

For a soccer player, that may mean aggressively go after loose balls…

For a basketball player, it may mean committing to a preshot routine prior to each foul shot in practice…

How to Develop Positive Competitive Habits:

Identify 1-2 habits that are critical for success in your sport and make you stand out among your peers.

Determine how and when you will work on these new habits in training.

Prior to each repetition or drill, say to yourself, “repetition builds habits,” to remind yourself to focus on the new behavior.

You are what you repeatedly do!

Start today by developing the habit of refocusing when you are distracted using the strategies in The Focused Athlete.

“I felt the time spent in your seminar was very well organized. The topics were great and you had the coaches communicating in an open atmosphere. Thanks again for your time and effort and I look forward to talking with you in the future.”
~Coach Dave Wannstedt, Miami Dolphins

“I am a Brazilian coach in Tempe, AZ. I am the vice-president of the Arizona State Brazillian Jiujitsue Federation, long story short, I would like to say that you have a great program; you have been able to help me and my competitors. My fiancee, Kristina Barlaan, who just won two medals at the 2012 World Championship has also mentioned your program as a big help.”
~Gustavo Dantas, Coach

“After your session, Mason had a game. He had the best game so far! He hustled, shot, no goals but two assists but he was cool with it because his focus was on shooting and not scoring (finally), defended well with his hands – finally put it all together. It was fun to watch and you could tell he felt really good about it.”
~Kelly, Lacrosse mom

“After going through a week of practice using your pre-kick routine, I was perfect on three field goals on a muddy field and a windy day in my final college game. Now I am entertaining the idea of trying to enter the professional ranks. Thank you for your help!”
~Nate Littlefield, Collegiate Kicker