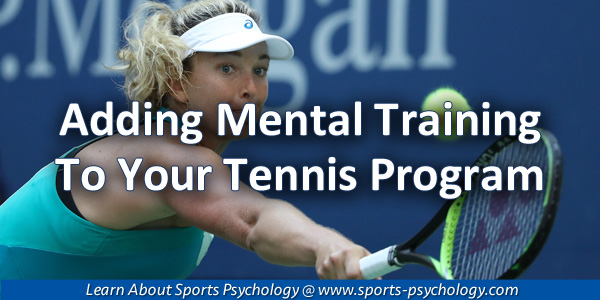 Why Are These Pros Using Mental Game Coaches?

What’s the one thing holding you back from peak performance on the court?

If you were to ask a tennis player after a bad match as to the reason for their performance, rarely does that player talk about their technique.

Most tennis players attribute bad performances to some mental factor:

So how do most of these players go about trying to improve this part of their game?

They hit the court to put in more practice hours, take private lessons or hit hundreds to balls on the ball machine to work on their swing.

While putting in extra effort can elevate your consistency, physical work will not improve your mental game.

If you want to improve your mental game or overcome your own personal mental traps that keep occurring in matches, you need to dedicate time to mental training.

Mental training was a common thread that helped a few tennis players elevate their games at the 2017 US Open.

Coco Vandeweghe and Kevin Anderson both attributed their improved play under pressure to mental training. Vandeweghe and Anderson utilized mental game coaches to overcome previous mental hurdles and raise their game to the next level.

Vandeweghe upset Karolina Pliskova, 7-6 (4), 6-3 to advance to her first US Open semifinal but not without some obstacles to hurdle.

Vandeweghe, who had difficulty with emotional outbursts in the past, slapped several backhands into the net but maintained her focus and stayed composed to dig herself out of trouble and win the match.

Vandeweghe’s tennis coach, Pat Cash, and her mental coach have helped her with the mental skills necessary to perform under pressure.

VANDEWEGHE: “I think the biggest thing [Cash has done] is channeling my intensity and tenacity out on the court, and putting it into a singular focus.”

Kevin Anderson’s play is another story coming out of the Open about how mental training improved performance.

Anderson’s new aggressive mentality gave him a decided advantage to remain focused and keep fighting throughout the tough match.

Anderson, in his post-match interview, talked about how working with a mental game coach has helped him break some bad mental habits and improve his game.

ANDERSON: “I just felt it [the mental game] was a part of my game I could maybe just get a bit better at. So many people say it’s 90 percent mental. Everybody knows how to hit tennis balls, and we’ve been playing tennis so long that it’s tough to make huge changes.”

These performances are proof that past mental traps can be overcome to help you get the most out of your game, improve your consistency and unleash peak performance.

A Tip for Adding Mental Training to Your Regimen:

Review past performances and notice common mental mistakes that occur in your game.

You can also download this short test to help you with this:

Next think of how different you would play if you improved these mental areas.

And improve your tennis confidence with our Tennis Confidence CD and workbook program.

Boost Your Self-Confidence in Tennis With Expert Mental Game Coaching!

You can work with Dr. Patrick Cohn himself in Orlando, Florida or via Skype, FaceTime, or telephone.

“Dr. Cohn did a great job working with my son Joe on his mental skills for tennis. He taught him the mental skills and discipline necessary to move to the next level. Thanks Doc!”*
~Mike Withers, Joe Withers Father

“Maggie had such a great weekend. As always, after she works with you she just seems more grounded and focused. She’s less likely to look around and get distracted during her match. She’s more focused on one point at a time. Also, as a parent, I’ve learned to encourage her process goals and not outcomes. Consequently, she played well and won her first doubles match, upsetting a seeded team in a really really close match!”*
~Katherine Johnson Cannata, Maggie’s mother

“Since you last worked with AJ in early September, his National ranking has improved from 349 to 148. His tournament record at one point, since talking with you was 17-4, with 3 of the 4 being in third sets or tiebreakers and 2 of those matches being the same player, whom he has since beaten (you may recall he was on an 0-9 losing streak when we contacted you). His tie-breaker record is at least 90% through last weekend when he won the 18s District tournament with a semi and final match tiebreak win. Your help has definitely improved AJ’s results and his on-court demeanor has substantially improved.”*
~Dawn Woodman, A.J.’s Mother

“I want to let you know that your “Tennis Confidence” CD program has been extremely helpful to me. I listen to the CDs in the car and the program is helping me overcome a lifetime of tournament performance Anxiety. Thank you!”*
~Wing Yu, Tennis Player