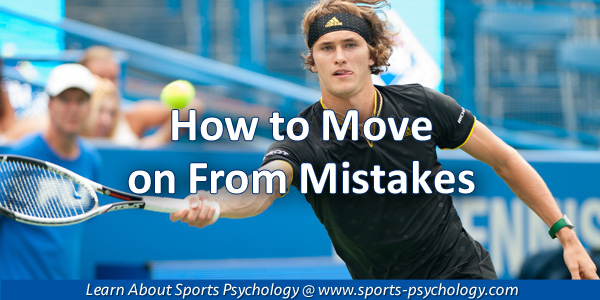 How to Let Go of Mistakes and End Dwelling

Once the mistake is done, it should be done, but hard to do for many perfectionist athletes.

Unfortunately, the past is no longer the past when you keep its memory alive in the present.

All too often, athletes ruminate about a mistake and beat themselves up mentally to the point that they can no longer focus on the next play, shot, or point.

When you dwell on mistakes, you give them energy and cause them to fester in your mind.

The only option to perform best in the present is to clear your mind, move on and move forward.

Of course, this may sound easy but you have a choice in what thoughts you focus on.

Focusing on the mistake keeps you stuck in the past and divides your attention into three parts:

How can you possibly perform your best if you only focus one-third of your attention in the current competition?

There is an old saying, “Spend your money wisely.” That saying is a warning that if you spend your money on frivolous things, you will be unable to buy what you need.

The same is true of your focus during play.

Paying attention to previous mistakes is frivolous especially when your focus is best spent on the present moment where you can really make a difference.

Denis Shapovalov is a rising tennis star whose recent performance during the Rogers Cup shot him up the ATP rankings from 143 to around 67th.

Shapovalov smashed a ball away in frustration that accidentally struck the umpire in the eye. Shapovalov’s mistake caused him to be instantly disqualified and cost Team Canada the fifth and decisive match against Great Britain.

How would this mistake affect Shapovalov’s future performances?

Well, Shapovalov made a conscious choice to learn from his mistake, move on and move forward.

Shapovalov’s run at the Roger’s Cup was a career-defining performance that was borne out of his ability to let go of his mistakes and focus in the present moment.

In his post-match interview at the Roger’s Cup, Shapovalov was asked about the effects of the Davis Cup incident.

SHAPOVALOV: “I don’t look back too much. It’s in the past. What I did was very stupid. It was very immature. Yeah, it’s in the past now. I’ve grown from it. I’ve learned from it. I’m on a new chapter of my life.”

Past mistakes or even within the current game or match are over… You need to get over them too.

Choose to focus on the brand new opportunity right in front of you and make the most of it.

How to move on from a mistake:

Learn all my strategies for composure and letting go of mistakes with The Composed Athlete audio and workbook program.

“We are amazed at how much ‘The Confident Athlete’ program has helped my niece play her best tennis during matches. She literally made it to the farthest round of a tournament (semifinals) after finishing the CDs and workbook. We are going to do all 3 in the series.”*
~Jason Bourguignon, Uncle

“I want to let you know that your Tennis Confidence CDs have been extremely helpful to me. I listen to them in the car, and the program is helping me overcome a lifetime of tournament performance anxiety. Thank you!”*
~Wing Wu

“Dr. Cohn did a great job working with my son Joe on his mental skills for tennis. He taught him the mental skills and discipline necessary to move to the next level. Thanks Doc!”*
~Mike Withers, Joe Withers son

“Danielle did really well with controlling her emotions during the matches today. We were very proud of her for not showing her frustrations during the match; I think that was a big accomplishment. She really looked in control of her emotions even when she double faulted or made mistakes. The changes we saw on Danielle’s behavior in less than 24 hours were AWESOME! Thank you for your guidance!”*
~Jennifer Alamo, Tennis Parent