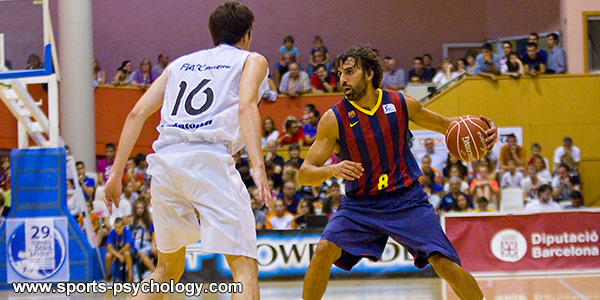 This is what makes sports exciting for athletes.

When athletes are young and they are playing in their backyards, they dream up scenarios where their last ditch heroic efforts turn the tide and win the game in dramatic fashion.

Yet, when athletes become older, fear sets in and they don’t to take on that role of taking that clutch shot.

Some athletes get swallowed up by the moment and falter under the competitive pressure.

What makes an athlete clutch?

First of all, being clutch doesn’t mean always making the final shot to win the game or hitting the landing perfectly or striking out the side in the ninth inning.

Being clutch is not backing down from the inevitable pressure that surrounds an athlete when the game is on the line.

Being clutch is feeling the pressure and performing anyway regardless of the possible result.

Being clutch is feeling intensity, but not nerves and the ability to focus and perform up to your ability no matter the game situation.

In 151 clutch minutes (less than five minutes remaining in the 4th quarter or overtime and neither team ahead by more than five points) Lillard has scored 127 points.

Lillard reflected on what has helped him perform in clutch moments and he pointed to an incident when he was younger that helped cope with the sense of pressure to perform in closing minutes of a game.

LILLARD: “I remember in the eighth grade I had a game winning shot. I think we were down by two. I hit a three-pointer with one second left and I took my jersey off and started celebrating. It was one second left and I got a tech and the other team got two free throws. We ended up losing the game by one and that was the worst thing that could ever happen.”

To put it another way, a loss is the worst that could happen and nothing more.

LILLARD: “I’ve had a lot of moments where something just didn’t go my way at the time that I needed it to in a game. It just made me not fear what the outcome would be… I think it just made me more calm in those situations and it’s just going to be what it’s going to be.”

What helps an athlete perform best in the clutch?

What helps an athlete to stay calm?

Not worrying about results.

Being calm frees you up to play and to focus like you normally would which increases your ability to perform your best despite the circumstances.

The truth is, you can be clutch if you can let go of what could happen and just play the game with trust in your skills.

How to Perform in Clutch Moments:

First, you need to realize sports are not life-or-death. It’s just a game.

Second, don’t define the moment as clutch and attach significance to the outcome.

Next, you need to know that being clutch doesn’t mean hitting the mark every time but making the attempt to hit the mark.

Fostering a “clutch” mindset is a matter of staying grounded in the moment, minimizing the “fear,” and managing expectations.

“Every serious race car driver needs to work with a mental game expert, such as Dr. Cohn of Peak Performance Sports. Dr. Cohn taught me how to harness the power of confidence, focus, and composure on the track. Even better, I am able to apply his mental game strategies for racing to the rest of my life!”*
~Burney Lamar, NASCAR Driver

“Walker did another medal, 2nd place time of 7:56 in the 2-mile relay. He shattered Doug Butlers and Brevard County school records. You have no idea how far Walker’s come with his mental game! Walker never loses anything. I can’t thank you enough Dr. Cohn for helping Walker!”
~Lesa Hersch, Walker’s Mom