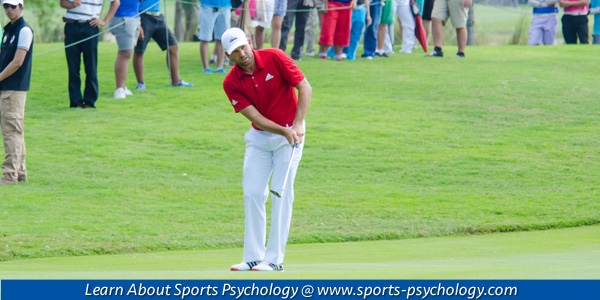 Many athletes and coaches think that sports psychologists only teach mental imagery and goals setting. But this is not really the case. Mental imagery has a place in sport psychology, but it’s only about two percent of what we teach athletes at Peak Performance Sports.

Mental rehearsal, also referred to as imagery, guided imagery, mental practice, or visualization, is defined in sports psychology literature as, “the cognitive rehearsal of a task in the absence of overt physical movement.”

I think there is a strong place in performance enhancement for mental imagery, but it should be a small part of your overall sport psychology program.

Most athletes use imagination and mental imagery instinctively to help them prepare for and perform motor skills. When I was an athlete in high school and in college, I would instinctively “rehearse,” or see the play in my mind, before execution. A mental coach or team coach did not instruct me to use mental rehearsal at that time.

For coaches today, the important topics of discussion in this area are:

However, there are other theories in sports psychology that explain and support the use of mental imagery, which I will not delve into here. Most athletes are not concerned with the supporting research on mental rehearsal. Instead, athletes and coaches want to learn how to apply imagery in a meaningful way in order to enhance performance.

When discussing imagery, most coaches and even sports psychologist focus on “visualization,” but the use of imagery is more than just a “visual” experience. Athletes use many other modalities or senses when applying imagery, such as auditory and kinesthetic, which may be even more important (especially for kinesthetic learners and performers). Many athletes, such as Jack Nicklaus, popularized visualization or the visual component of mental imagery.

In his book, Golf My Way, Nicklaus says, “I never hit a shot, not even in practice, without having a very sharp, in-focus picture of it in my head.” However, imagery is not all about pictures in one’s mind. Nicklaus may be a visual performer, but not all athletes perform in pictures.

Imagery includes many senses, such as visual, auditory, kinesthetic, olfactory, and touch. Performers or athletes can imagine or re-create all of their normal senses via mental imagery or imagination. The most important task for the mental game coach is to discover the person’s dominant learning style or performance mode.

“I want to let you know that your “Tennis Confidence” CD program has been extremely helpful to me. I listen to the CDs in the car and the program is helping me overcome a lifetime of tournament performance Anxiety. Thank you!”
~Wing Yu, Tennis Player

“She did really well with controlling her emotions during the matches today. We were very proud of her for not showing her frustrations during the match; I think that was a big accomplishment. She really looked in control of her emotions even when she double faulted or made mistakes. The changes we saw in her behavior in less than 24 hours were AWESOME! Thank you for your guidance!”
~Jennifer, Tennis Parent

“Thank you for all the knowledge, tools, material, and guidance you have given me throughout the MGCP course. It was truly a great experience. I am looking forward to integrating your mental training system to students at the club, as well as to athletes that truly are committed, and strive towards reaching their peak performance.”
~Tim Whitehead, Tennis Coach

“On behalf of all of our coaches who attended the 2004 ITA Coaches Convention, I would like to thank you for serving as a featured clinician. I know that the coaches felt it was both enjoyable and informative. We greatly appreciate your taking the time to prepare and present such an outstanding clinic for the benefit of our coaches.”
~Nancy Breo, ITA Convention