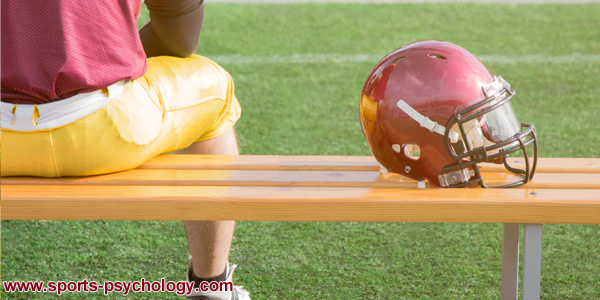 How Athletes Can Cope With Getting Benched

“BENCHED! I can’t believe it.”

When you are a starter and are benched, it often comes as quite a shock. There is often no warning when you are benched even when you might be having a bad game, an off night or a previous competition where you under-performed.

Thoughts pop up in your head such as:

Being benched can be embarrassing, especially if it happens during the middle of a game with your friends and parents watching.

When you are on the bench and anger, frustration and sadness permeate your body, it is difficult to focus, be a good teammate, cheer for your team, be supportive of your replacement and be mentally prepared in case your number is called.

However, it is especially important to be mentally prepared when you are benched.

Instead of taking it personally when you are bench, see it as an opportunity to improve your game.

Being on the bench may give you a different perspective on competing. You may see things in other players that you can add to your game. You can examine how other athletes approach the game and handle mistakes. You can learn from other players’ mistakes.

Besides all those potential learning opportunities, when you are benched and forced to face adversity, you have a great opportunity to develop the skill of mental toughness. If you have the wrong mental approach, you are left with nothing but bitterness.

Three-year starter and quarterback for the Buffalo Bills, Tyrod Taylor, was benched after a 5-4 start to the 2017 season while the team was still in the playoff hunt.

What could have been harder to accept for Taylor was that he was being benched for an unproven rookie who was drafted in the fifth round.

Taylor, a team captain, was having a respectable season throwing for 10 touchdowns and only three interceptions.

TAYLOR: “I’m obviously disappointed. I don’t agree with the decision, but ultimately Coach McDermott has a vision for this team, what he feels is best for the team, as well as the owners and GM. So I have to move forward and continue to be the leader and teammate that I am from a different role.”

Taylor wasn’t just being gracious after being benched; he was staying in the game mentally by finding a way to contribute and being mentally prepared for the next time he sees action on the field.

…And prepared Taylor was, when he was reinserted into the very next game in the second half throwing for 158 yards and one touchdown.

Within every adverse situation is an opportunity.

It is your choice if you seize that opportunity.

A Tip for Taking the Most Growth-Building Approach to Being Benched:

Of course it hurts to be benched. Allow yourself a short amount of time to sort through those feelings.

Talk to your coach about what you can improve to get back into the lineup. Set a plan to help you improve those areas.

And of course, you should never get benched for a sub-par mental game because that’s directly under your control…

Contact us to learn about the options to improve your mental game.

“After working with you on my mental game, the season went very well. I made all conference and an all American list and I still have room for improvement.”
~Alex Mack, college football player

“I felt the time spent in your seminar was very well organized. The topics were great and you had the coaches communicating in an open atmosphere. Thanks again for your time and effort and I look forward to talking with you in the future.”*
~Coach Dave Wannstedt, Miami Dolphins

“After going through a week of practice using your pre-kick routine, I was perfect on three field goals on a muddy field and a windy day in my final college game. Now I am entertaining the idea of trying to enter the professional ranks. Thank you for your help!”*
~Nate Littlefield, Collegiate Kicker

“With the use of the The Fearless Athlete and Ultimate Sports Parent workbooks, I see subtle but significant results in a short period of time. My young athlete did not even know about positive self-talk until we started the program.”
~Adam, Sports Parent